How believers witnessed in Jesus’ day

In this initial podcast, Dennis Nunn shares the basic definition of “witnessing,” Biblical illustrations, and who will benefit from these Every Believer a Witness podcasts.

Dennis Nunn, Founder and President of Every Believer a Witness Ministries has spoken in hundreds of churches across America to groups ranging in size from dozens to thousands. Prior to Every Believer a Witness, Dennis served as a pastor for 20 years. For many of those 20 years, Dennis was also an instructor for Walk Thru the Bible Ministries with Bruce Wilkinson, and later, Chip Ingram. Dennis twice received the President’s Award as Walk Thru’s #1 ranked instructor. From 2005-2018, Dennis also was a staff evangelist with Johnny Hunt at First Baptist Woodstock, where evangelism is a priority.

Dennis’ spiritual gifts are teaching and exhortation and he designed Every Believer a Witness to make learning to share your faith extremely simple and easy.

Dennis and his wife, Jane, began the ministry in 2005. While Dennis has been the face of the ministry speaking in churches, Jane is an instrumental partner working with Dennis, often behind the scenes, where she has handled correspondence, communication with churches, bookkeeping responsibilities and much more.  Jane has been the true picture of a Proverbs 31 woman and has faithfully worked in the ministry since its inception.  Anyone who has been fortunate enough to know Jane understands what an integral part of the ministry she has been!

Dennis and Jane now live in Summerfield (Greensboro), NC. They are blessed with three children and five grandchildren. 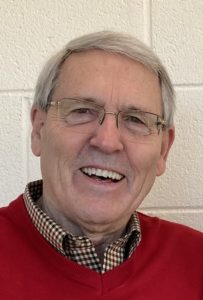